Oh, right. I was hiking in the Himalayas.

So we woke up on day 3, fed the goats, had breakfast (breakfast, by the way, was very creamy oatmeal, toast, and omelettes. Not very Indian, but certainly very delicious!), and started hiking… up. In fact, upon setting out, we could see our final destination:

Do you see what I see?

If you click on the photo you might be able to see a hostel perched upon the top of that mountain… yup… it was quite a day.

There were baby goats involved.

Their bleats were adorably high-pitched. Actually, we saw a goat that had been born just a few hours ago… it was still wet and could hardly walk.

And then we climbed.

Or actually, we just thought about climbing.

And when we reached the top we looked back, and saw

but it was too cloudy to see Kanchenjunga or Everest. So we hung out. And the next morning we got up at 6:15, and climbed a ridge thing, and then we saw

If it looks like Everest is at a lower altitude than where I took the picture from, it’s true.

Depending on your perspective, anyways.

Do not ever use a touch pad with Microsoft Paint. Ever.

Everest was about 90 miles from where I was standing. On a “flat” part of the earth (on the ocean, for instance), a 6′ tall person can normally see about 12 miles before the earth curves too low for them to see any farther. I could see Everest because it was sooooo tall. But it looked “lower” than me because it was on a different curve of the earth.

Forgive me for using some not-very scientific terms in there. But, you get the point, I think.

Oh, the range of mountains Kanchenjunga is on is also known as the “sleeping buddha.” Here’s a larger, daytime photo… can you see why?

So anyways, after getting up ridiculously early, we started back down. As expected, around 9:30 or so the clouds rolled in, and visibility was reduced to about 400 feet… not the worst cloudy day we’d had (on day 1 visibility was regularly 50 feet or less). Things cooled down, but it was still disappointing to lose the view of Kanchenjunga. Anyways, downhill all the way. We dropped from about 3300 meters to 1900 meters that day, getting in around 11.

We spent the rest of the day playing cards (finally! Nobody would play any cards with me before then for whatever reason), talking, etc. Oh, and for dinner, there was cake!

Also, that day was Holi. For those of you who don’t know, Holi is a spring festival in Hindu also known as the “festival of colors.” If you’re interested in the mythology behind it, check out the Wikipedia page. Basically though, it’s an excuse not to work, and to throw color instead. What? 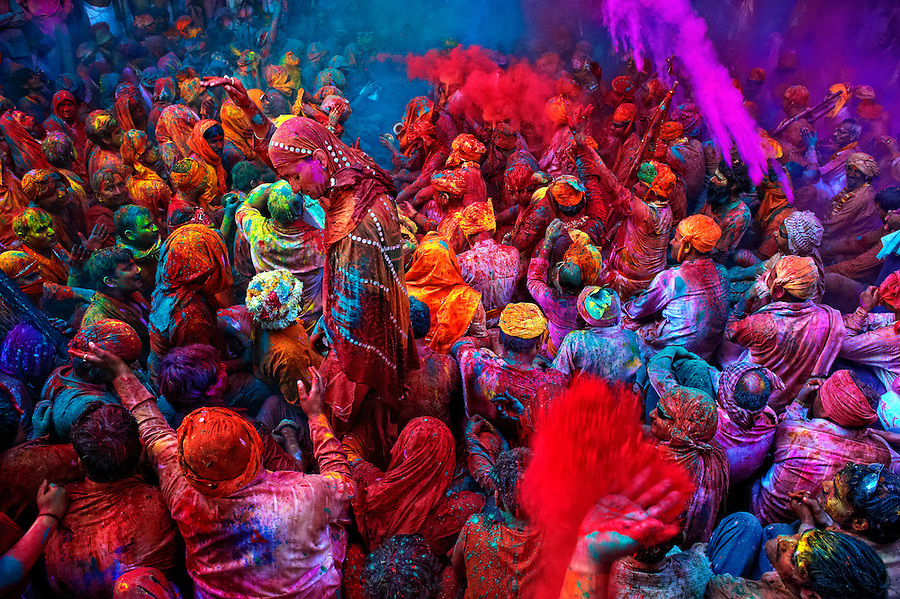 So it’s pretty much the best holiday ever.

I was talking to Ambika (Prabhat’s wife) about it, and she said it was mostly a community holiday. My idea was that everybody in India spent all day outside running around like kids coloring each other. As it ends up, only a few communities really celebrate Holi like you see in the photo above. It’s also celebrated by families, who take the day off and do or do not throw color, but only at each other. And some people don’t celebrate it at all. So that was disappointing, but at the same time, it is what it is. It made me feel not so bad about being in the Himalayas for Holi (side note: If I move to India, I would move to a place where Holi is awesome).

And anyways, we had a pretty good celebration. After serving cake to each of us, Dawa took the knife and cut the remainder into about 20 small slices. He then went around the camp and gave everyone a slice — the owner, the chefs, the other hikers. “It’s Holi,” he said. “Everybody gets some.”

I thought that was a pretty good way to celebrate.

The next morning some certain folks were quite sore, so stretching took place. Admittedly, even with my 23-year-old-  and just-biked-4023-mile-  body, my ankles were complaining just a little bit. There had been a lot of downhill the previous day.

This was to be our last day of hiking, so we just sort of relaxed and enjoyed it. Nothing terribly special happened, but it was a good day.

There was a 4 hour drive back to Darjeeling, where we unwound, and then went out to explore the city a bit. This included a tea tasting and dinner at a fancy restaurant. It was arguably the nicest restaurant I had seen on the trip… and the bill broke down to about Rs 500 ($10) per person. Thanks, India.

The next day was breakfast and a departure for the airport. On the way we passed some tea fields being harvested, which I thought was a cool picture.

Yes… for sun protection they all had umbrella hats.

And remember, they are probably making only minimum wage, which in India is $3/day. Enjoy your tea!

Then back to the airport… and then back home.

– The rest of my trip with Firefox