Somewhere in the past 80 days I apparently miscounted, because I’m supposed to leave on day 89, but counted today to day 82… so I changed it to day 80. That’s right — not only am I fixing bikes, I’m traveling through the time-space continuum.

Nine days to go, and I’m well over my goal. I’ve also built about 110 wheels and held seminars for more than 130 mechanics. I’ll put up official numbers for those items on my India wrap-up post.

Anyways, at least two cool things have happened lately, and I wanted to post about them.

If you’ve been keeping up you know my 90th bike wasn’t the type of bike I usually work on — it was a racing bike (to compensate for this I fixed 91 bikes… and I’m now at 104… *ahem*). It wasn’t just any racing back, however. It was the kind of racing bike that has sealed bearings.

For those of you who don’t know, there are a lot of bearings in bicycles. Bearings allow things to rotate in one dimension while maintaining their position in all the other dimensions. In your car, for instance, the wheels are on bearings (the back wheels are on one set; consequentially, they only rotate “forwards.” The front wheel are on two sets, they rotate “forwards” and “side-to-side” to allow steering), and the steering wheel is on bearings. In bicycles, the headset, bottom bracket, hubs, and pedals are all on bearings. 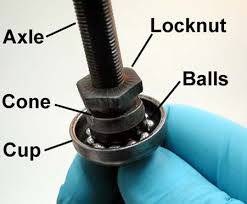 Explaining this to 130 Hindi-speaking mechanics was a lot easier when I had a whiteboard.

So there are two kinds of bearings: Unsealed (first photo) and sealed (second photo). Unsealed bearings are easy to overhaul because they are not “sealed” together. Usually you just open her up, degrease, regrease, and put her back together. You can also adjust the tightness very easily to remove play (wiggle in other dimensions). Sealed ball bearings, on the other hand, need to be replaced once they have worn down. They can’t be taken apart without being ruined. Furthermore, to remove them you “need” a bearing remover; to re-install, you “need” a bearing press.

My, don’t those look expensive.

I put “need” in quotes because, you know, I’m me. Manas (the friend whose bicycle it was) had sealed bearings, and needed them replaced. But we didn’t “need” a bearing press.

For the sake of my career as a bicycle mechanic, I don’t want to say exactly how we got the bearings out. Suffice it to say it involved a hammer (and I can say that because bearing removal tools require a hammer) and we didn’t damage the rest of the wheel.

I don’t know what happened to his seals but they appeared to have disintegrated, and the balls inside were well pitted.

Since we didn’t have a bearing press we tried to think of other things we could use. The only other thing we had on hand to press things together was… well, his quick release.

This looks less expensive. In fact, two are included free with every bicycle!

Quick releases are used to keep wheels in the bike (or not in the bike, as it were). Indeed, they apply quite a bit of compressive force. Nobody can seem to agree on how much — I’ve heard estimates of anywhere from 90 lbs to 900 lbs — but basically, it’s a lot.

So, here’s to science.

Okay, we didn’t have the right size washer, but we made it work anyways.

Amidst all this, Manas’s wife came home and asked what we were doing. I told her “science.” She said, “Yea right! It looks like two mechanical engineers geeking out over doing something the wrong way.”

Okay, that probably wasn’t exactly what she said, but that was the gist of it. And I mean… she was right!

As a bike mechanic you’re expected to know a lot about bikes (I mean… hopefully). Unfortunately, not all bikes are the same, and not all problems are the same. Especially once bikes are ridden, they can be as varied in imperfections as the people who ride them. They have a history of their own, and without knowing it intimately, it’s not always possible to know what’s wrong. There are some common solutions (your chain skips when you pedal really hard? Likely the cassette needs to be replaced). More often than not, however, when we’re asked for a solution, the reply is, “I need to see it.”

So by the time you get the bike and ride it yourself, the customer (or friend, or friend of a friend who is secretly Sales Manager for Ferrari India) sort of expects a knowledgeable answer. By this point an experienced mechanic can get it right 95% of the time… but there’s still that extra 5% where you make an educated guess and hope you guessed right.

Similarly, sometimes you can just look at a bike and know something is wrong. With experience, you’re right most of the time (lately I find myself walking up to my manager — who is arguing with a customer over what’s really wrong with their bike — and just telling him the headset it loose). But again, every bike is different, and every customer is different.

So that moment when the customer gets on the bike again, starts riding, and gets a smile on their face — that moment you know your 95% is more like 96% — you feel pretty good about yourself.

A few days ago, that happened twice. And to make the story telling easier, it even happened with an English speaking customer.

It first happened when I saw the bike. The handlebars were just plain at the wrong angle. In typical Peter S. fashion (Peter was my mentor at Tacoma Bike last summer) I waltzed up and said, “Gee, I bet his wrists hurt when he rides this thing!”

I can hear Peter saying it now. Anyways, I was talking to the dad of the kid who owned the bike, who said, “You know, he’s never mentioned that,” then asked his son if his wrists hurt when he rode.

[The only “Did I mention that you’re awesome?”

photo I could find involved a My Little Pony.]

Next it happened when he was arguing with the owner (NOT the manager) over a clicking sound coming from the bottom bracket (a side note about the owner: He doesn’t know anything about bicycles but is really good at pretending he does. We don’t really get along). The owner seemed to think it was the chain. Chains do not make clicking sounds unless they have a stiff link, which present other problems. I swanked up to the owner and said, “It’s not the chain. It’s the bottom bracket.”

Then I fixed it.

Then I got thanked.

One thought on “Science”